Following on from this post on my Cinepicks app, I wanted to show how I implemented the 5 star rating system. Before going into the technical detail, here’s a quick overview of the rating system.

The Cinepicks app allows users to find out which streaming service they can watch TV shows and films on. Aside from that main feature, the app is also a place that users can rate those TV shows and films, with the ability to go back through an ordered list of previously rated titles. 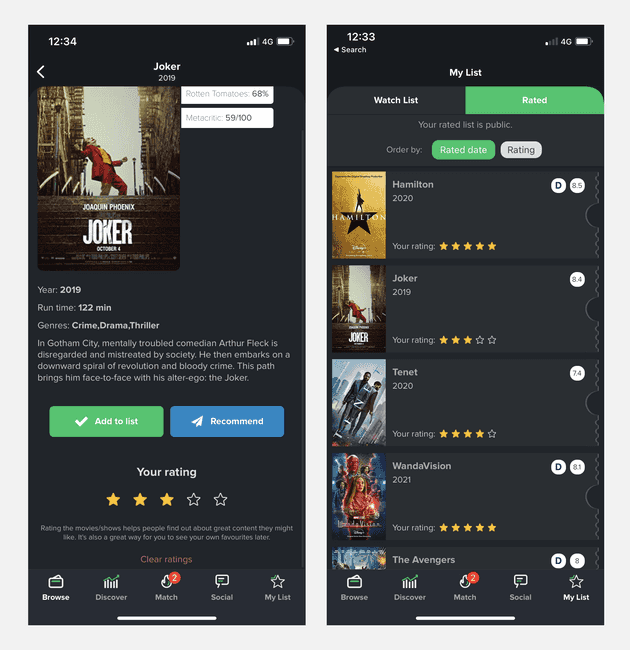 The ratings use a simple 5 star system, with the stars updating from just an outline to a filled in yellow colour based on the rating.

The UI is done with React Native using a simple component with local state using hooks:

We know there will always be 5 stars, so we start off by creating an array of 5 blank elements in order to map over 5 times. Each array element has an index value (i), which is stored in userRating state with the use of setUserRating when a star element is tapped. Then, depending on the number in this state, each image conditionally shows either a filled or empty image with source={userRating > i ? StarFilled : StarEmpty}. This process means the stars will be filled up to the rating that the user selects.

As well as handling the UI effect of showing what rating is currently selected, we also want to send this to the server to store and persist the rating for the user. Without storing the rating, the user could tap the back button and visit the title page again, and the rating will be empty.

In order to send the data to the server, the submitRating function is fired on each tap, at the same time as the setUserRating function covered above:

The submitRating server request and setUserRating local state update are both done at the same time for a faster feeling UI. A traditional way to handle this might be to send the request to the server and wait for a response before updating the stars with the users selected rating, however this would mean a short delay in the UI updating whilst the server request is processing. The chance of this simple server request failing is so low, so we can assume it will pass, and update the UI to remove the user rating if the request fails. This paradigm is called Optimistic UI Updates, and is a great way to make an app feel lightning fast to users.

The back end of Cinepicks uses Express on Node JS with a Postgres database. When a user taps a star the submitRating function on the front end is executed which sends a POST request to the rate-title endpoint on the server:

The route gets the three data points from the request:

The IMDB ID is the unique identifier of the title the user is rating. This value exists for all TV shows and movies in the app, and is useful as all APIs I get data from accept an IMDB ID as a parameter.

Then using a TitleRating service, the main process of storing the user rating is executed:

Later, when the rating for a particular title is required, there’s a function to get the data:

This rating is required when the user first opens a title, among other areas, because the user may have rated the title previously and that should be shown in the UI.

As well as taking a user rating for a title, the app also has functionality for users to add a title to their watch list, and also say wether they like the look of a film. These two data points require the same values for storage as the title rating, which is the user ID, the IMDB ID, and either isOnList (true or false) and likeLookOf (true or false). Because the data points are so similar, everything is stored in the same table. With 2 levels of caching and heavily indexed tables, this is a great way to utilise a single table for multiple uses.