Since the intro of Javascript ES6 classes I’ve not had much need to venture back in to structuring web apps with functions and prototypes, but I’ve recently had to work on some legacy code from an old project and was surprised by how much I had to brush back up on. There’s a lot to take in with JS prototypes, and even though the class construct is useful and stops direct usage of JS prototypes, the “class” is just syntactic sugar and prototypes are still used in the background.

So here’s a post covering the basics of Javascript prototypes along with inheritance, and a little about composition to finish it off.

In JS, everything is an object. You may have heard this saying before and it’s largely true because of the nature of the prototype tree in Javascript. Javascript prototypes are “the mechanism by which JavaScript objects inherit features from one another” (MDN) - in other words, it’s Javascript’s approach to inheritance. All objects have an associated “prototype object” which is the objects template containing it’s inherited methods and properties.

For example, the following is how we can declare an object:

The available prototypes for objects, arrays, numbers etc. can be viewed in multiple ways. You can look in the browser console for example: 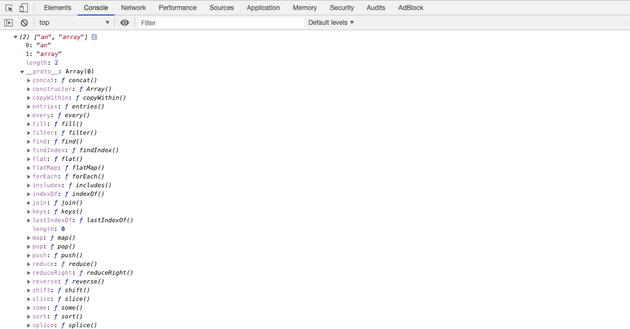 You can also access in JS by using Object.getPrototypeOf():

There are also ways to get and set prototypes in Javascript. This leads on to JS prototypal inheritance, which is a core part of object oriented Javascript (since there’s no “proper” class based way of OO). But before I get on to that, I want to give a brief overview of a confusing part of Javascript - the different ways to access an object’s prototypes.

I like to log whole objects/array to see their prototypes as it seems more flexible and intuitive to me, but if you just want to see the prototype of an item, you can use getPrototypeOf and __proto__. They both do similar things, but getPrototypeOf is meant to be used over __proto__ as it’s the current standard..

The above example shows how we can get the prototype of an array. We know this is an array as we are instantiating it as one so it might not be obvious why this is useful. It’s more useful if we want to get the prototype of something we have created via a constructor function perhaps, as we’ll be able to then see all the custom methods we’ve added.

Another thing to note is that the following are both exactly the same:

They are the same because we are getting the prototype of the instance from which myArr inherits from, which is the Array prototype in this case.

Prototypes and the constructor function

The same can be done with Array.prototype as Array is the constructor function. This can be proven by logging console.log(Array). which shows it’s value as a function.

W2Schools has a useful page on constructors which list the built in Javascript constructor types.

The above example extends the native Object constructor function (the function which is responsible for creating new object wrappers with the use of “new Object()”) by adding a new method to the Object prototype. This new addition to object (myNewFunction) can be seen in the console by logging the following:

It’s important to note that with Object.prototype, the ".prototype" property can only be accessed because it’s the constructor, Object. In contrast, let’s say we have the following:

The .prototype property does not exist on myObject because it’s not a constructor. Instead, myObject is an instance of the Object constructor. BUT, we can still access the prototypes which are inherited from the Object prototype, by using Object.getPrototypeOf(myObject) as I mentioned earlier (more on that later).

It’s also worth mentioning at this point that the prototypes on a constructor are not exclusive to Object, Array and other native JS constructors. They can also be used with custom constructors:

We can add prototypes to our custom constructor though:

This raises the good old question - is it better to have properties defined on the constructor, or on the prototype? I’ll cover that a bit later.

One final point on constructor functions is that they can inherit from other constructors.

The above inheritance shows how we can inherit the properties which are defined in the constructor, but let’s say we have the following:

This log above will throw an error, because it’s attempting to access a property of the “parent” constructor’s prototype which is not part of the child’s prototype chain (because they are two separate constructors which are only currently linked by a simple function call). The real power of prototypes and constructors come from sharing the prototypes as well as the properties within:

… is called before setting any more prototypes on MyChildConstructor.

The above sections go in to setting and inheriting constructor functions, but functionality and properties can be shared between object literals as well:

As these are not constructor functions (they are instances of the Object object), we can’t access a .prototype property directly to inherit, so we use the setPrototypeOf() function as mentioned earlier. I mentioned earlier that there’s also the __proto__ value which is kind of the old way. Well this is another way to achieve the same thing using __proto__ and Object.create():

which can be written more conveniently as…

Although this works, it’s better practice to use the first solution of setPrototypeOf().

When would you want to use prototypes?

I personally don’t use prototypes that much - I only go for them if they are performing something very specific (and often quite small) that I want to be on all instances of an object. The operations I add are often static, and don’t affect anything else in the code base other than just that instance.

Some people do things differently, but I like to extend things like the Array and Function constructors sometimes. Not so much now because we already have so much helpful functionality already with map, filter, etc… but if I’m doing some sort of deep object comparison perhaps.

However, a lot of developers don’t like inheritance at all with any programming language. The argument is that with inheritance we are making a lot of assumptions about the structure of our classes (or prototypes), specifically the methods and properties they inherit from one another.

Instead, people argue that it’s best to view things in terms of what they do rather than what they are, allowing us to easily add and remove a “thing“‘s capabilities (functionality).

Rather than going in to coding examples, there’s an excellent YouTube video which covers in great detail.